MEL is sitting on the couch.

MEL: Wanna come and sit on my lap?

MEL: C’mon! This is a once-in-an-afternoon offer!

GRAHAM crosses the room, leaps onto the couch and sits next to Mel with his front paws in her lap. 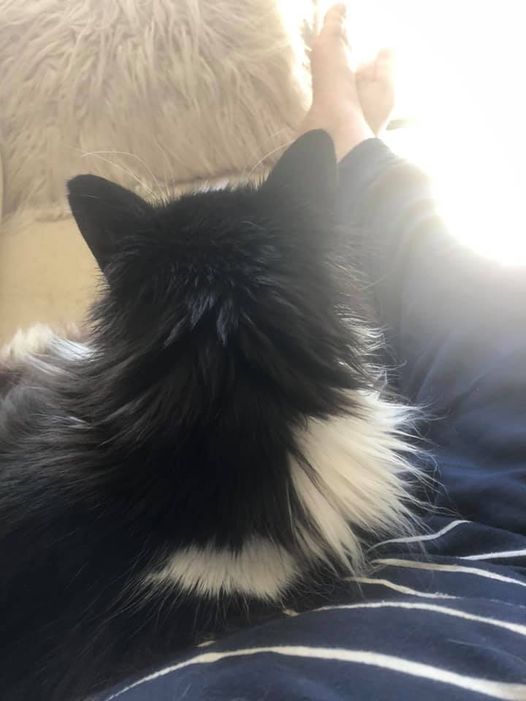 Next week on Crazy Cat Convos: You're so Graham, you probably think this convo's about you.

MEL is standing in front of the open fridge, muttering to herself about what groceries need to be replenished.

MEL: And I'll need milk, and salad greens, and tomatoes…

GRAHAM rushes into the kitchen and stares urgently into the fridge.

MEL (in an extremely TAC Ad Voice): I'm not talking to you, big ears.

Tap o' the keyboard to you. When you call Apple's tech support at night in Australia, you get someone in Ireland. I have had… computer problems this week and so I was talking to a very nice tech bloke with an extremely blarney accent who mentioned it was morning for him.

I could not resist committing the error of pointing out he hadn't greeted me with "Top o' the mornin' to you!"

Anyway, this was on Wednesday night but I only just remembered it now.

Easter thoughts. I am not a Christian, although I have a culturally Christian background. But I have always been struck by the story of Jesus’ agony in the garden of Gethsemane on the night before his crucifixion, when the friends who are meant to keep him company instead fall asleep, and so he feels utterly alone as he fills with existential despair and begs his God and Father if there’s any way to spare him the suffering to come.

Up to this point in his story, Jesus is described as a leader, a teacher, an activist, a shepherd of men. Someone who has the answers and doesn’t hesitate. But to me he is at his most relatable and human in this moment in the garden, when he desperately wants someone else, not him, to take the wheel.

I'm also musing about the story of Mary of Bethany, the woman who poured a jar of hugely expensive spikenard perfume on Jesus' head at a party. I just love the image of this. The room suddenly flooded with luxurious powerful scent. Jesus' hair, dripping. His feet, glistening. His mates, like "WTF bitch".

This perfume was worth a year's wages, and there's speculation that it was Mary's dowry. It was The Best and she poured it on Jesus so nobody's nostrils could doubt that he was The Best (cf. 'The Best' by Tina Turner as Christian anthem).

Also, what if Jesus is quietly freaking out about his impending death? None of his friends have noticed this, and Judas in particular is like "Ummmm, you could have sold that and given the money to the POOR, i.e. uh, to ME, who is in charge of handing out charity donations."

But Mary notices. She pours the perfume as a reminder to Jesus himself, so that every time he gets a waft of the scent on his body he'll remember the plan.

There's something literary to this story, as well – a kind of foreshadowing – because this perfume is also used to anoint the bodies of the dead.

Jesus tells his disciples, "Get off her case about selling the perfume and donating the money to the poor, because poor people will always be with us, whereas I won't – she is anointing my body for burial."

Next week on Stupid Cat Convos: The contempt I deserve.

Just remembered a tragic vignette from earlier today. I went to the kitchen to make a cup of tea and heard Graham's collar bell jingle.

"It's Jingles, meh meh meh!" I said in imitation of Graham's squeaking voice.

Then I peered under the table and saw him looking back at me with an expression of complete contempt, as if to say, "You absolute fool."

On debating and complicity. I read an article that mentioned two Cabinet ministers attended the very 1988 intervarsity debating tournament at which Attorney-General Christian Porter is alleged to have raped 'Kate', a woman who later committed suicide. This says a lot about the schools and university debating scene. I think a lot about where former debaters end up in life and it’s often law, politics, or government, or as we see here, a combo of all three.

I was a university debater and met a lot of arrogant and entitled young men through this scene. I was never a brilliant enough debater (I represented Unimelb at Australasians tournaments but never Worlds) or politically assertive enough to make the bros feel threatened. Also, I was in a weird position because RMIT had no debating society so I joined the one at Melbourne, where I always felt more like a tolerated guest than a real member.

And I feel ashamed now that my politics at the time were so bland and noncommittal: I internalised the debating mindset of arguing both sides of any argument and I allowed myself to be steered towards the Right by these bozos, and to ridicule the Left, because I wanted to be liked and accepted.

But still I noticed how women would be undermined by being sexualised or belittled for being unattractive, and non-alpha men and international students would be bullied. I put a lot of this down to MUDS’ toxic reputation, which I compared unfavourably to MAD at Monash, which I felt was friendlier and more egalitarian, but who knows really.

It would not surprise me at all to learn of more alleged rapes at school and university debating functions.

My extremely unscientific Mitch theory. I don't know why I can't just be normal, but I have long had a personal theory that Mitch is an iconic late-millennial/Gen Z name. So like a normal person I went to the NSW government list of popular baby names, got the data on the name Mitchell and plotted it in Excel. 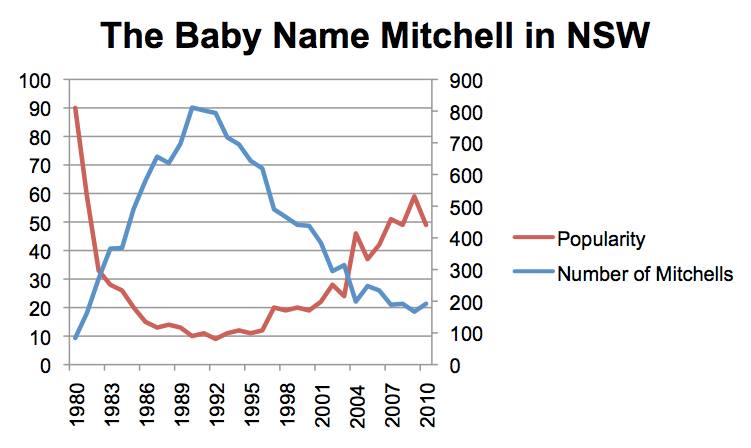 I'm so annoyed that I couldn't figure out how to make Excel format the data properly. The data docs I was working from showed the top 100 names in a given year, ranked by popularity, so 90 is the 90th most popular name, and the most popular (9th) looks the lowest on the graph. It's been years since I used the graphing function of Excel and I am a word person not a maths and stats person!!

So it's a bit shit, but you can see that while the number of NSW babies named Mitchell peaked in 1990 with 811, its popularity as a proportion of all babies in a given year peaked in 1992 when it was the 9th most popular name, even though slightly fewer Mitchells (794) were named that year.

So you'd expect there to be lots of Mitchells aged around 29-30 at the moment.