New Year's Resolution: get a new housemate! As those who speak to me regularly would know, for the last two weeks I've been frantically engaged in a search for two housemates, because my hipster housemates told me on 8 December that they would both be moving out on 22 December.

This is the worst possible time to be finding new housemates. There is the busyness factor: finding time to interview prospective housemates while trying to finish off end-of-year work and taking part in the usual round of pre-Christmas social activities. Then there has been the financial pressure of having the entire house's rent deducted from my bank account as usual without housemates to reimburse me, at a time when I have been spending money on Christmas presents and socialising, and I won't be earning any more money until two weeks into January.

I have already found someone for the larger of the two empty rooms. The housemate in question is a friendly man in his early 30s who will henceforth be known as "Foxtel Steve". But the smaller (but with most excellent built-in storage space) and astoundingly well-priced room is still vacant. Because of the price and the size, most people who've contacted me about it have been travellers who only want somewhere for a couple of months (I want someone to stay until at least August next year), strange quiet people who make me uncomfortable, or nervous desperate people who make me uncomfortable.

Why don't you email me?


Muh powhurs! Thanks to Leigh for introducing me to the concept of "powhurs" (scroll down for the YouTube video of bizarre gold), which I have attempted to share with people but they just look at me weird, kind of like when I quote that scene in Total Recall where Arnie dresses up as the fat woman in order to get through customs but his animatronic head starts malfunctioning and gets stuck on the phrase "Twwwooo weeeeks!"

Anyway, the water in our office is dreadful - it comes out of the tap variously a pale yellow and a rich delightful reddish-brown. Jeremy spent some hours cleaning this reddish residue off the urinal when we first moved in, all the while characterising it as fifty years of urine. But I think it was just rust. I bought a water filter jug that vastly improves the water quality, but it still doesn't quite make it go clear. The Opulent boys have grown tired of it and have invested in a large vat of shop-bought water.

However, I am persisting with the filter. The other day, Will said that drinking the weird water will give me special powers. As you can imagine, I was most taken with this notion, and immediately started to muse on what powers I could have. I might return to this post and add some thoughts, but for the moment here are some powers that I feel I ought to try and attain.

The power to shoot laser beams from my fingertips

Useful for getting apples off high trees, etching things into cool shapes, fixing my eyesight and ridding myself of body hair forever. Of course I would also want each laser beam to be accompanied by a "piaowww!" type noise, like Han Solo's blaster in Star Wars.

The power to make hair return to its natural colour

Oh how satisfying it would be to look at someone and instantly their hair would return to its natural colour. Then we would sort the wheat from the chaff.

The power of Sex Eyes

Good lord, as if Dr Hook can talk! Surely that is one of the biggest album cover misnomers of all time! But anyway. Penny has long expounded on something she calls 'the sex eyes', which I imagine to be akin to the relaxed yet focused state required for viewing Magic Eye pictures or operating an alethiometer. I have never been able to master it. But perhaps by drinking the water in our office, I would be able to look in a certain special way at people I wanted to have sex with, and they would inevitably comply. Alternatively, Sex Eyes could mean that I would be able instantly to identify others who were interested in having sex with me. This would avoid a lot of time wasting.


"So how was the conference?" I really dislike having to answer this question. It is an invitation for me to be boring, even to myself, because I am tired of repeating the same stories to everyone who asks. And even though the person asking the question knows that they are also going to be bored by my answer, having not experienced the stories themselves, they feel they have to ask anyway. It is a pointless yet necessary performance of having-been-awayness. But here are some random answers for you:
I have been feeling ashamed. Comprehensively ashamed by my institutionlessness, the shortcomings of my body, my lack of social skills... But especially by the retardation of my paper. At best, it received an ambivalent reception. I was worried that I'd be crucified in question time, because I had written the paper in such a vacuum of fatigue and institutionlessness that I had no way of knowing if it even made sense or if I was using the wrong terms and theories.

I felt it went poorly. I felt I rambled in the question time and missed the point of all the questions. I felt richly ashamed at being the object of my own paper, the layers of bungled irony enveloping me like filo pastry. Afterwards I avoided people in case they wanted to attack me personally.

People have told me that I am beginning to carve my niche. But right now I don't see myself or my ideas belonging anywhere much. This makes me angry, like when I read the paper yesterday and it was full of annoying subbing errors, such as spelling "horde" as "hoard" and "flair" as "flare". Nobody ever seems to get as annoyed by these as I do. One of the worst offenders was the editor who commissioned my hipster-hop story and then just never ran it. I still don't know what to do with that story. 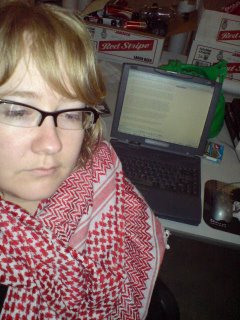 It is pretty cold in the office so I have borrowed a keffiyeh that I found on Evet's desk. Around 2am I was about to go home but then I thought I'd just take the cushions off the armchairs and sleep on the floor. But it was too cold and I gave up around 5am. I keep hearing Saige's voice in my head, "It should only take you about eight hours..." I am hoping to get the thing done by around 8am and then I'll go and have breakfast and then come back and start on the calendar, get that done by 10am in time to log in at work. Then after work I can go home, put a load of washing on so I have clothes to take to the conference, and sleep.


Little things are important. Like, I know it's a total cliche that Italian waiters refer to you as "bella"; they do it without thinking, like you'd say "sorry" after bumping into someone. But it is important. I spend the rest of my life thinking of myself as ugly. It is nice to have five seconds of being beautiful. Plus a really nice lasagne in which they've got the consistency of the bechamel just right. That is also important.