Alfred lives! At least for a little while. This makes me very glad, but also makes me a little embarrassed at how upset I was yesterday when I thought he was going to get put down. Dad writes:

Alf has had a 'senile vesticular syndrome' incident. The nearest thing to this in human terms is a stroke. At his age the vet advised it was not worth the cost of doing an MRI scan. This would probably only tell us more precisely what is generally obvious from his symptoms. The treatment he suggested is rest and physiotherapy. The latter is aimed at hopefully restoring his mobility to the point where he can get himself outside for No 1s and No 2s. The practical issue is nursing a large and rather heavy dog. We will just soldier on for a while and see how both Alf and we cope.

Matt and I took him to the vet in the black plastic wheelbarrow tub. You would have laughed - King Alf and his two litter bearers. I could not think of anything better at the time to be able to lift him into the back seat of the car. The vet suggested I support his back legs with a towel under his tummy. This enables him to walk a little and he is definitely improving. We will review his progress with the vet on Saturday. I have to make some cloth strips to go round his shoulders so I can lift him up with two handles - one at the front and the other at the back. This will be less strain for both of us.

Matt is back from Adelaide and he is able to spend a little time with him in the mornings. The other fortunate thing about timing is that the weather is milder now so if we have to leave him on his bed on the back verandah during the day it will not be too cold for him.

I am wondering what is going to happen to the hole that Dad dug in the backyard. Is poor old Alf going to have to sit on the back verandah staring at his own grave? Of course, he probably doesn't give a shit, being a dog and all that, but the possibilities for dark farce really are endless.

Yesterday I was also thinking that Dad has always drawn the short straw when it comes to pets. As a child, he had a cat called Persil (so named because he had a white shirtfront and Persil is a laundry detergent), who crawled under the house to die. Because Dad was the smallest and thus the only one who would fit, he had to go under the house to retrieve Persy's decaying corpse. This incident has always struck me as truly horrifying, akin to the incident in Gremlins where Phoebe Cates tells how her dad went missing at Christmas and then weeks later they found his body stuck in the chimney, dressed in a Santa suit. Having to dispose of the body of a loved pet has thus always been one of my greatest fears.

But yeah, the dog's okay - for the moment.


What's it all about, Alfie? About an hour ago I got an email from my dad saying that our family dog, Alfred, is getting put down this afternoon. It would have been his fourteenth birthday on 1 October.

Alfred is a labrador/golden retriever cross. He is a really gorgeous dog and, like many of his breed, stupidly loyal and friendly. He has been much adored in our household, in an exasperated way, because we never trained or socialised him properly and he got crazy excited when he saw other dogs, and treated the cat's food as a special snack put out just for him.

Alf was originally my brother miT's dog, but lately my littlest brother Matt has been closest to him -- he'd sleep in Matt's room and it was Matt who would take him for walks. During my insane exercise kicks of the past, I used to take him on epic walks as far as North Balwyn and Box Hill. At the beginning of the walk Alf would pull at the lead and drag me behind him, but by the end I would be dragging him, and sometimes he'd just lie down on the nature strip and look at me imploringly.

He was also well known to local rangers because he would regularly escape from the back yard, which terrified and annoyed my mother because she was simultaneously afraid he would get run over and that she would have to fork out to get him back from the pound. He did this regularly at the beach -- once my mother found him happily socialising with the campers down by the foreshore -- but despite his breed, he was never that into swimming. This, I'm sorry to say, was because when he was quite young, Dad decided to teach him to swim by throwing him in a rockpool. We have photos of the exact moment Alf decided he disliked water.

However, Alf hasn't been in a mood to escape lately because he has been pretty sick in an old dog way -- creaky in the back legs, weird old-dog lumps growing on his head, and quick to feel the cold. (We made one of Dad's old jumpers into a hilarious dog-jumper for him.) Yesterday he collapsed and couldn't get up again -- or rather, he could after a lot of effort, but he falls down again after a few steps. Apparently it's nerve damage; some kind of a stroke. What gets me is that he's still happy and alert and isn't in any pain. It's not as if he is being "put out of his misery"; but as Dad reasons (and he's right), Alf weighs 45kg and there's no way we can lift him up and take him outside every time he needs to go to the toilet. Sadly there are no nursing homes for dogs.

I am slightly amazed at how upset I am, because I was not usually close to Alf; it's well documented that I am a cat person. Also, I'm aware of the body of literature saying that pet deaths are often belittled but ought to be taken seriously because people grieve over them like they would over people. I can't help but wonder if this is a preview of the way I will grieve over people I love when they die. But at the same time it seems quite callous and ludicrous to compare people's deaths to that of a dog. Even a well-loved dog. I think the worst thing will be seeing my family upset.

Alf is going to the vet at around 2:30pm today. The idea was that he would be put down then, and then Dad and Matt will bury him in the back yard under the lemon tree at around 5pm. The hole was pre-dug yesterday as soon as things looked bad. But as nobody could attend this funeral except Dad and Matt, and Dad doesn't want to bury him in the dark, and in a farcical twist my parents have to go to a play tonight for their MTC subscription, maybe Alf will live to see one or two more days.


Small dispiriting moments. So I was in the office and the phone rang. It was a journalist from a magazine wanting to do a little blurb about how the magazine is now in Sydney.

Journalist: Mel, was it?
Me: That's right.
J: Were you at the Sydney party?
Me: Yes, I was.
J: Were you the tall glamorous one?


Hot Jesus! Last night Lefa asked if there are people out there who find "Jesus types" attractive. The reasons for her question have been lost in a fug of beer, but I thought it was at least worth a Google. There is actually a guy who looks like and identifies with Jesus who's looking for love in northern Virginia and the Washington DC area. He advises: "Prospective respondents should read 1 John 4:18. True to artistic depictions, I have a lean swimmer's body and a six-pack, and if you have sought your best in life you will also be in good shape ... Irish need not apply."

Why does Jesus hate the Irish? Isn't he meant to love his neighbour and turn the other cheek?

But that's not all. I decided to spice up your weekend by finding the hottest pics of Jesus available on this blessed internet... Ask yourself: Who would Jesus do?

Bedroom eyes, those bedroom eyes / I'm lost for words, I'm hypnotised... I love the sizzling rays of animal attraction around his head.

Or perhaps LL Cool Jesus is more your thing.

This is if you prefer a more rugged, masculine Jesus.

Or maybe you're into a little bit of black velvet...

Of course you know how to love him, Mary! He's a man! He's just a man! And you've had so many men before, and in oh so many ways, he's just one more! 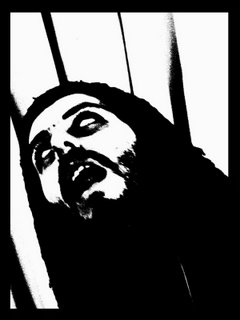 Could this be the Second Coming? Oh dear, if I believed in hell I'd be headed straight there after that.